This square has certainly lived up to its fandom, as I was starting to think it would never end.  This was entirely my own fault, since I kept letting myself get distracted by other projects.  Finally, it's finished, and I can add it to the growing pile of squares I've got waiting to be joined. 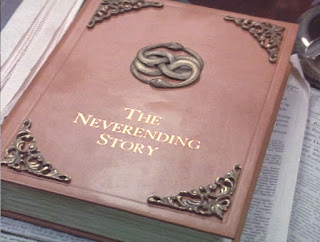 The Neverending Story was one of my favorite movies as a kid, and Atreyu was one of my first crushes growing up.  I mean, he had a horse!  I think the story kind of played into one of my all-time biggest wishes -- to be able to become a part of the fantasy worlds in my books.  I always sort of identified with Bastian, being the odd duck with their nose stuck in a book, staying up all night reading because I had to know what was going to happen next.  Also, there was a pretty good re-make that was done as a mini-series, which was truer to the original book (which I still need to read...if I can ever get my hands on it). 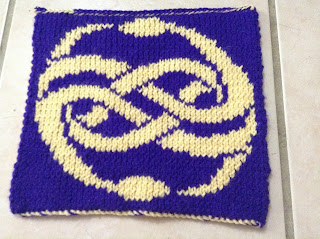 I love the Auryn symbol, since it's always reminded me of both Celtic knot-work and the Ouroboros of mythology.  Both can symbolize a sort of never-ending cycle, so I always thought the author was rather clever in its design.  I'd love to use the pattern again sometime, maybe on something unexpected, in lieu of traditional knot-work.  (And I'd love to see how many people notice...)
Hubby couldn't guess this one, even after seeing the finished pattern.  He was more of a Goonies kid, I guess.

The original pattern is from the Lattes and Llamas GAL.
Posted by Dizzy at 3:49 PM No comments:

This shawl is my first attempt at a pattern that uses a chart, which comes in for the lacy bits around the edges.  Up till now, I've followed written instructions for my projects, or color charts, which are fairly straight-forward.  But, no progress ever comes unless you're willing to try something new, so here I go.

The yarn I've chosen was literally begging to be used in this pattern.  It's a fine, light-weight baby yarn with a lovely sheen and a super soft touch.  The shimmery silver color reminds me of moonbeams, and it's so soft I imagine it's what moonlight would feel like, in yarn form.  Yes, that's right, I just got that poetical.

Given that I'm used to working with thicker yarns, it's taken a bit of getting used to...you can hardly feel it sliding through your fingers.  The pattern I'm working with is Easy as Pie by MaidenBrooklyn.  It seemed a good one to start with, since it's my first attempt.

Starting out was probably the worst part.  Since I'm basically learning new skills as I go, I always allow for a bit of difficulty...but this one was crazy, and the fault was obviously with me, for the most part.  I re-knit the first ten rows -- literally, and without exaggeration -- about twenty times before undoing them and starting over.

First off, the yarn was so fine that I would find myself snagging it in unexpected places as I tried to make my stitch, or else I would stick the needle between the threads of the yarn.  Second, I've never used stitch-markers before, so it took a few attempts to figure out how to not get them tangled in my stitches.  Third, I would set the piece down to deal with something else for a moment -- one of the hazards of having an infant, four cats, and a husband in the house, to be sure -- and completely lose track of where I was, and have to start over.  Next, I had to deal with the embarrassment of realizing my yarn-overs were really yarn-unders, and that I had forgotten how to do a fairly basic stitch.  But, after many, many re-starts, I was finally able to get the main pattern of the shawl started.

Once started, this pattern is -- as advertised -- easy as pie.  The main body is a four-row repeat, before the charts kick in.  This makes it perfect for taking with me on-the-go, like for those long waits at the doctor's office when you show up on time but they're still on lunch...yeah, it's perfect for times like that.

From here, it's time to move onto the charts for the lace.  I think I've figured out what all the little symbols mean, and the stitches they stand for.  That adventure will have to wait for another post, though.  In the meantime, I might just take a break and declare a video-game day.

Eomer: Now is the hour! Riders of Rohan! Oaths you have taken, now fulfill them all, to Lord and land!

I came rather late to the Lord of the Rings fandom.  While some of my friends had read the books in elementary, I only started reading them in high school.  I blame "The Hobbit", which to this day I honestly find to be a very slow read.  Anyhow, I was almost finished reading the Fellowship when they announced they were making a movie of it...which the timing of forevermore attached me with a certain stigma in the Geek realm -- those who are "only in it because of the movies".  It is unfortunate that such elitism is still present amongst many nerds today, when we should be instead celebrating our common nerdiness, regardless of when a person discovered their love for a fandom.  In fact, my own sweet sister, Naomi, had never seen Star Wars until a couple of years ago, when I sat her down and played all six episodes for her.  (The original three first, of course.  No sense scaring her off with Jar Jar Binks!)  I still love her dearly, though.

Rohan has always held a certain charm for me, probably since I never really grew out of that phase every young girl goes through when they're obsessed with horses.  I got on my first real horse when I was 9, and you'd be hard-pressed to keep me away from them ever since.  Most of my job experience and marketable skill-set has to do with tending large farm animals, mainly of the equine variety.

Eomer, nephew of the King of Rohan, is one of the few men I would gladly follow into battle.  He is honor-bound, loves his sister dearly, and is willing to face impossible odds for what is right.  Plus, being portrayed by the *gorgeous* Karl Urban doesn't hurt.  Rohan is a kingdom that -- though rustic and rural -- values their horses, and bases their entire socio-economical structure upon them.  Sign me up!
This square was slightly more intricate in its design, as I had to modify one of the Rohirrim banners to fit my allotted scale.  I first tried to recreate the flag of Rohan, but it did not go well.  It may actually be included in some sort of blooper-reel of failed patterns at some future date.  All in all, I think the pattern I devised in the end turned out rather well.  It's also a tattoo I'd like to get, though not quite so pixelated.


Given that my husband, Kishi, is not the Lord of the Rings fan that I am, I offered up the end pattern before it was completed.  I was about a quarter of the way through, but we'll never know if he could have guessed the design on his own.  I'm a little too soft-hearted sometimes, it seems.  I'll have to make my next square a doozy for him.

This is one of the first patterns I worked with that has a definite right and wrong side, since it's asymmetrical.  Each row on the pattern is worked from either left-to-right or right-to-left, alternating.  You just need to keep track of which row you're on.  Since the flag of Rohan is a white steed on a field of green, that's the side I'm going with as the 'right' side.

The Rohan pattern is available here.
Posted by Dizzy at 4:49 AM No comments:

Email ThisBlogThis!Share to TwitterShare to FacebookShare to Pinterest
Labels: knitting, Lord of the Rings


This square is burdened with glorious purpose.  As soon as I decided to start on this project, I knew that Loki would have to be represented.  As in, his will likely be the center square, proudly displayed for all us mere mortals to behold with wonder.  This was one of the first designs I created myself, and thanks to Microsoft Paint, a fair bit of spare time, and an eye for detail, I think it turned out rather well.  Finally, all those hours of creating pixel art in high school when I should have been doing my homework have paid off!  (Kids, do your homework...pixel art doesn't pay well.)
Loki is the Norse god of mischief and chaos, who dwells in a sort of moral grey-area.  While he has been cast as the villain in numerous Marvel movies of late, the real (mythological) Loki was neither evil nor good...he was basically the ultimate chaotic-neutral.  He played pranks that often got out of hand, but it was never done maliciously.  I prefer to ascribe more of that vein of thinking to the Loki of the Marvel universe...and I've gotten into countless debates with friends over it.

Movie Loki is sarcastic, smooth-talking, always ready with a quip, deviously cunning, incredibly intelligent, tall dark and brooding, and oh my GODS that knee-melting smile...basically he is the embodiment of every misunderstood-bad-boy characteristic there is, all rolled up into one perfect package.  I could quite easily sit here all day and write an essay on why I love Loki so much, but let's just say that he speaks to the chaotic-neutral trickster in me.  Loudly.
This one was a bit easier for the husband to guess, given the trademark color combo of green and gold (actually more of a cornmeal yellow, but the best I could do).  He figured it out before I even got halfway.  He was surprised that I hadn't started with Loki, after all, given my obsession -- but I did want to practice my technique first.  After all, you don't want to mess up an homage to the God of mischief...he can be a bit temperamental.
Though the squares are generally designed to be reversible, I'm definitely keeping the gold-helmet-on-green as the front of this piece.  It's kind of Loki's trademark, and you just don't mess with the horns.  One trick I've found to keep the edges together is to wrap the knitting yarn under the other on the first stitch in every row.  This saves you from having to stitch the two sides together later.  Other people have suggested knitting the first stitch or two in the opposite color (which leaves you with a border around the edge), but you can choose whatever technique you prefer. 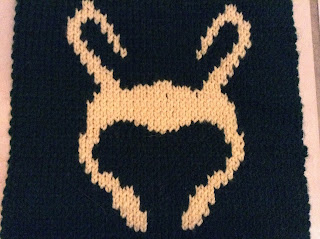 You can find my Loki pattern here.  Keep in mind that though the pattern is 45x57 stitches, when knitting, it does end up being a square.
Posted by Dizzy at 4:14 PM No comments: