So, having made scarves for the three colors of TNG Starfleet uniforms, there was one very important uniform that I had left out.  Today, I rectify that omission.  I proudly present the Acting-Ensign Crusher uniform scarf. 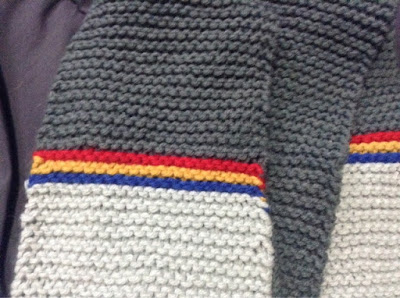 While certainly not the...prettiest...of color schemes, I rather enjoyed the straightforward simplicity of this design.  Literally just straight rows of knitting.  No mid-row color changes.  No post-knitting embroidery to neaten up the diagonals.  And fewer ends to weave in, which is always a plus. 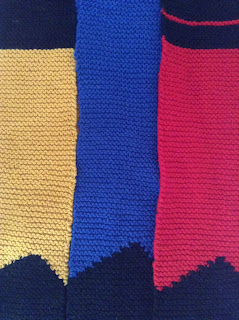 I felt I had to include this design with my other Trekkie scarves, because Wesley's uniform has become somewhat iconic amongst fans, despite being rather hideous.  Keeping in mind that this was a sci-fi show from the '90s, and there were quite a few fashion atrocities throughout, it does seem that poor Wesley bears the brunt of them.  I kind of wonder if Wil Wheaton did something at one point to piss off the costume designer...

Anyways, my TNG scarf collection is now complete.  And since my little Pup seemed so determined to try it on (while it was still on the needles -- I had to untangle her several times), I made her a mini-sized one of her very own.  Daddy couldn't be happier. 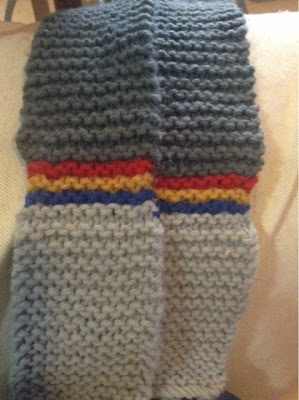 Soooo...given how pretty much awful this past year has been, how about we all just pretend it never happened and move forward, okay?  Sounds good to me.

Despite all the bad mojo of 2016 (and sometimes, even because of it) I still managed to get a ton of knitting done.  I'll be sharing some of those finished projects in the coming weeks, as well as those still on the go.  Up first is a small collection that I've had in mind for a while, but just finally got around to making. 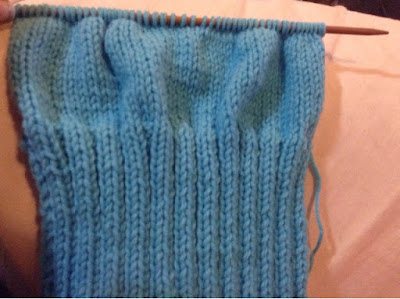 I've made "ear" hats before, but these had to wait for just the right combination of colors to show up in my stash.  Add a bit of a fringe down the middle, and Boom!  Pony hats! 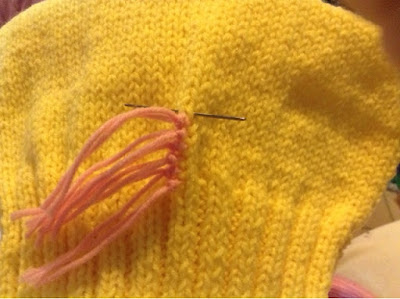 My Little Pony has made quite the comeback in recent years, with a show, toys, and style that is popular with many adults, as well as kids.  Not even joking, it's become so popular that they have their own convention.  With enough attendees that their dancing was falsely recorded as a small earthquake.  (Two or three years ago...look it up) 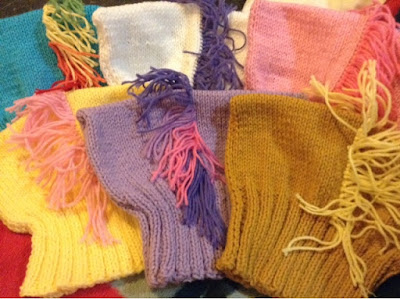 Anywhoo, these babies work up pretty fast, and I was able to whip up one for each of the six main (or mane, haha) characters: Applejack, Rarity, Rainbow Dash, Twilight Sparkle, Pinkie Pie, and Fluttershy.  I'm even making a couple of secondary characters, and maybe then a few custom colors for fans who have invented characters of their own.  Overall, it's a fun, quick project that keeps me interested because there are so many ponies to choose from, you never have to knit the same hat twice! 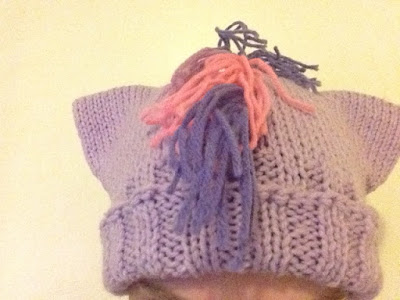