This is one of those pieces that just kind of came together without any sort of conscious thought.  I was headed to my sister's place for the weekend, and wanted a project I could work on in transit.  Everything I had on the go was too cumbersome to transport easily, so I grabbed a set of needles and the first ball of yarn that came to hand from my stash drawer, packed up the baby and the husband, and set out.

The ball I pulled was a pretty, marled (hah, I just learned that word -- it means when a yarn has two different colors twisted together!) self-striping wool, and the colors remind me of sherbet.

I started and re-started a couple dozen times on the bus ride over, not sure exactly what I was trying to do, but just knowing that I wasn't doing it.  Finally, I got something going that I was happy with, and it just took off from there, forming itself into what it wanted to be.  Turns out, it's another scarf.  But a really pretty one!

This one was pretty simple, so it worked up fairly quickly -- just plain garter stitch with an increase at the beginning of the row and a decrease at the end for the zig, then switching them around for the zag.  Since the wool is so fine, it's more of a fashion scarf than a winter face-warmer, and the zig-zagging pattern gives it an interesting drape.  As I told my husband, it's "wonky".
Back at home, I was slightly sleep-deprived over the next few days as I continued working on my wonky masterpiece -- which anyone who knows me will tell you generally leads to statements of random silliness.  The shape of the scarf reminded me of a lightning-bolt, which made me think of Thor, who really has no business with such fruity oranges, pinks, and purples.  And yet, in a half-lucid state, I announced to Kishi that I have titled this piece "Thor in Springtime".

Because it made sense to me at the time.

Getting through the main body of the shawl was just fine, and once past the initial intimidation factor, reading the lace charts wasn't nearly as difficult as I thought it would be.  Granted, I specifically chose a simple repeat pattern to start with, but it certainly helped to build up my confidence for the next project.  Besides, once you learn to decipher ancient Egyptian hieroglyphs and Norse runes, knitting charts are a breeze by comparison.

I brought in an extra set of stitch markers (super glad I decided to make the second set!) to help myself keep track of where the pattern repeats started and ended, but that's mainly for my own personal OCD reasons and not absolutely necessary.  Also on that note, the original pattern required you to switch to the lace charts in the middle of a four-row repeat...which required me to do some quick math and add on an additional six rows, in order to keep both the pattern and my sanity.  Switching mid-repeat literally makes my brain itchy, and I go out of my way to avoid it whenever possible.  (The pattern must be completed!  That's why it's called a pattern, not a random!)

If I had followed the pattern exactly as written, the whole thing would have been finished on a single ball of yarn...as it was, I had to dip into a second for the last four rows and the bind-off.  Not bad, though, and I still have enough of this gloriously soft yarn left to make another two shawls, with a bit left over.  Honestly, this stuff feels so wonderful, I would knit myself a full body-suit out of the stuff and wear it all the time.  Maybe a onesie.  With feeties.  Oh Gods, now I need to invent a pattern for that!

Anyways, with the exception of a good soak and blocking (laying the piece out and pinning the edges to dry in its desired shape), my shawl is now finished, and just in time for fall.  I can certainly see it coming in handy as the nights get cooler.

Despite the fact that it is only the very beginning of September (where did the time go?!) and still a gorgeous summer here in Ontario, it's only a matter of time before the cold weather hits.  That being said, I figured it's a good idea to be ready for it.  And, since I already own about a million scarves, I decided to try something new -- a hat!  Now I can keep more than just my neck warm.
I wanted something fairly simple to work on in the few minutes I can find while the baby's napping, so I came up with a piece that is knit flat, then stitched together at the end.  I had a ball of worsted yarn kicking around, and still had a bit left over at the end.  (It's actually a sage green, though it looks different in each image...)  This was done on US6 needles.

The bottom/top edge is just a simple rib stitch, and the main body was done in stockinette.  I added a simple design for texture, which is just a 1-3-5-3-1 reverse-stitch diamond pattern (just purl the stitches on a knit row, and knit the stitches on a purl row).  Basically, the body can be done in whatever stitch you choose -- you could add cables, color-work, or anything you'd like.  Just remember that the finished piece will be folded in half, with the ribbing at the bottom on both sides.

Keep in mind when casting on and off that you need the edge to have a bit of give, so keep it loose.  Once you've finished knitting, just fold it over and sew down the two long sides.  (It's probably easiest to do this part inside-out.)  After that, you're basically done.  Feel free to add pom-poms, tassels, or other decorative adornments.

"I understood that reference!" - Steve Rogers

Captain America is not my usual brand of hero.  He's too much of a stand-up goody-good, who's got a problem with foul language.  (Spending an hour with me would likely give him an aneurysm...my dad was a trucker.)  I'm not generally one for the straight-laced good-guy characters.  In fact, I spent most of "The Avengers" cheering for Loki.  Many hours have been spent in lively debate with my dear friend Lioness, who is an avid Cap fan, and while I could certainly agree with some of her points -- and the fact that he is rather good-looking -- I just really didn't like the guy.

Then, something inside me snapped.

I don't know if I suddenly discovered my inner goody-two-shoes that had been locked away in some deep, dark corner, or if Lioness's arguments had subtly shifted my perceptions, or perhaps my older daughter's obsession with him was contagious.  (Note: you cannot win a "who's cooler?" argument against a five-year-old, even if Iron Man is way cooler than Cap.)  Maybe I'd just been binge-watching Marvel movies too often.  (I like to watch the full collection, in chronological order, before going to see the latest release.)  Whatever it was that happened, I realized that I had -- *gasp!* -- become a Cap fan.  Not like on a borderline-creepy level, like Coulson...but still. 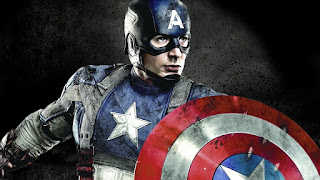 I was ashamed, at first, and tried to hide it.  But when I found myself sneaking away from my husband at a convention to buy a Captain America t-shirt, I realized that I had a problem, and had to come clean.  I came out to both Kishi and Lioness over sushi that night.  They were both very supportive.  After the initial gloating and mocking stage, of course.

Anyways, I still don't understand exactly what it is about Cap that makes me like him so much; it's been sort of a slow build that defies any rational explanation.  He is good-looking, though, and built.  And his anachronisms are adorable.  I must admit that I'm going to be rather torn, once Civil War is released.
When I first designed this square, I had used blue as the main background color, and planned to swap the red for white for the star.  The blue and red stripes just didn't work well for me, too dark...Kishi asked if I was making a Spider-Man square at first.  Changing the blue for white on the stripes worked better, and is more true to the costume, too.  Once I finished the stripes and switched in the blue, Kishi figured it out.  A little over half-way, which isn't bad. 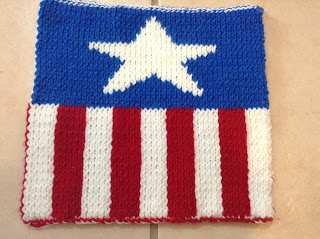 The great thing about working in double-sided knitting is that you don't need to worry about weaving in the ends of your yarn.  Simply insert a small crochet hook and pull the ends into the "pocket" that forms between the two sides.  Just remember to knot them first, to avoid all your hard work unraveling!

My pattern for this square is found here.
Posted by Dizzy at 1:44 AM No comments: